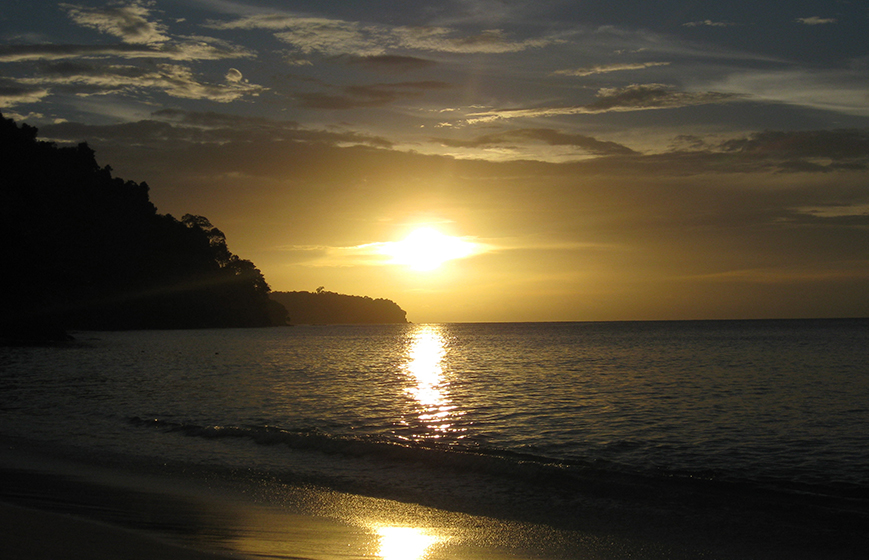 Perks and pitfalls of a female traveller

Seeing the world solo is daunting at the start. There’s that moment when you’re walking the streets, entirely lost, searching for a hostel, life in one bag, having quit your job, while everyone you love is at home down the local having their normal Friday night, and your brain does wonder ‘hmm, yes, what exactly was my logic here?’ But then you stumble on an amazing food market, or a bunch of fire-throwing street performers walk by, and everything’s alright again…

This is true for women and men. A girl can develop nostalgia for a pint of cold English cider so bad she’ll blow two nights’ accommodation budget just to get her hands on one. A guy can be the blokiest of blokes, and still if something goes wrong (missing a flight and being mugged of ones iPhone for example), he’ll cry on the shoulder of a stranger at three in the morning and tell them how badly he misses his friends back home. (The cider was a highlight, the night time counselling sess, less so.) And yes, women are just as independent as their counterparts, just as safe abroad if they keep their head switched on bla bla. Yet there are some experiences, both good and bad, that boy explorers just won’t happen upon. Months of touring Southeast Asia has exposed me to a few of them – this is what I have found: 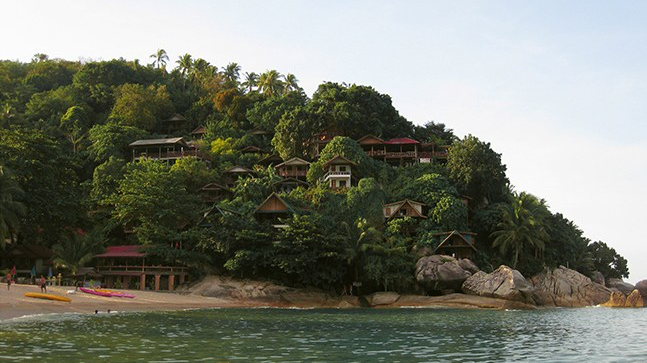 Eating on the cheap

There are a whole bundle of buffet-style restaurants lining the shores of Thai islands. As there are at home. These buffets charge a fixed fee. As they would at home. What is yet to be instigated in the UK are separate prices for men and women. On the assumption that girls are not such fatties as boys (error) they’re charged just two-thirds of the price. A lovely, grossly unfair bargain for women folk and their supposed sparrow-like appetites. If you’re a man-type reading this and feeling indignant, don’t you worry – dress up as a ladyboy and the same discount applies. 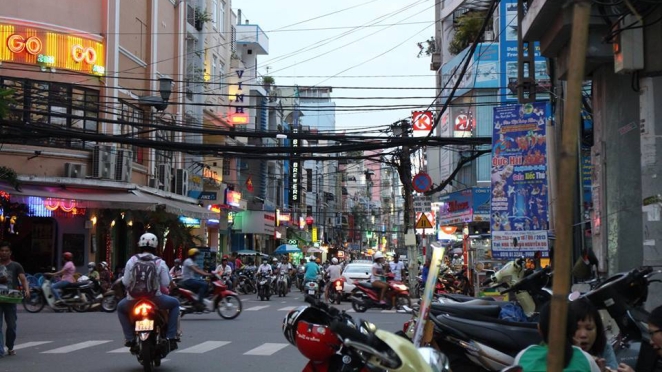 Ho Chi Minh. Not even at rush hour.

Wherever you are in Asia, getting a decent massage is pretty much obligatory. They are so good, and unfathomably cheap; the relaxing kind with oils, reflexology where you come out pressure points tingling from head to toe, traditional Thai technique where you come out bruised, abused and knot-free… all worthy ways to spend an hour. So I was surprised when a male friend I’d met in Chiang Mai said he steers clear:

‘Even nice places almost always offer you… extras. Not every guy wants them.’

‘Well yeh obviously, but they sort of ‘accidentally’ err, start you down that road, and then it’s a lot more difficult to say ‘No.’’

Not entirely convinced happy endings are so very prevalent in proper spas, rather than crumby alley way salons, I quiz another guy who has been living in Malaysia for a year:

‘Oh yeh, it’s everywhere. Rugby makes me ache like hell but I get so nervous going to get a massage. Always go for the oldest, ugliest masseuse if there’s a choice, as I figure she may not be into it, but even then you’re lying there waiting for it to happen. The ‘accidental’ stroke. Best way to get a legit massage is to go with a girlfriend, then they don’t try anything.’

A month later I’m in Ho Chi Minh hanging out with two guys I’ve met along the way.

‘You know, we’re getting way less attention in the streets now you’re here,’ one comments.

‘Definitely. Last night every two minutes a beautician down this road was inviting us in for a ‘massage’ – to the point that it got kind of annoying – but tonight they’re steering clear.’

To test this theory I drop back a few paces and watch them walking past a row of spas. The very next girl stops them.

‘Massage for you sirs?’ She leans in so I can barely hear her. She smiles and winks. ‘I give you good price, happy for me, happy for you?’

The boys give me a ‘told you so’ look and spend the rest of the evening walking right by my side. I’m not entirely thrilled about my new-found role as hooker blocker, in fact it gets quite irritating quite quickly. But at least I know I can stroll into any one of these places to de-stress without being groped and charged extra for the privilege. 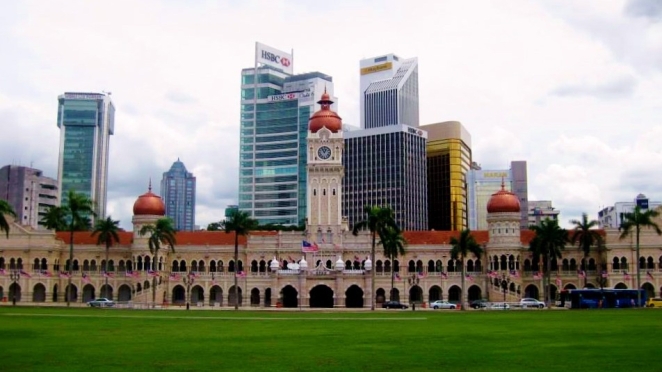 This is something that didn’t crop up until I hit Malaysia. Being an Islamic country, women need written consent from their husband if they are to travel abroad. They are also, for the most part, unlikely to be unmarried by their mid twenties. When two friendly countryside women started chatting to me on a train to Kuala Lumpur, I was unprepared:

‘So was it difficult to get your husband’s permission to come on holiday?’
‘I’m not married.’
Their eyes widen slightly. ‘Oh. How old are you?’
‘I’m twenty-four.’
Their eyes widen more. ‘Oh… So did your father give you permission to come?’
I still have no clue where this is going. ‘Err, no…’
Eyes turn from surprise to suspicion. ‘Your brother then?’
‘Umm, no, I didn’t need permission, I just sort of hopped on a plane…’ I trail off, this is clearly not what they want to hear.
‘So you’ve run away from your family?’
‘No I’m just travelling for a bit.’
‘So no fall out, you’re still part of your family?’
‘Yes.’
‘So then you did get permission to travel?’
‘No.’
‘So your father forbade and you just forged the document?’ They’re now positively alarmed.
‘What document? I don’t have a document…’
‘You must!’
‘I don’t.’

This lasts the entire journey, me dim and confused, them increasingly wary. At KL I jump in a taxi to my hostel. The cabby eyeballs me in his rear view mirror.

‘Here on holiday?’
‘Yep.’
‘So did your husband give you permission to travel?’
I pause momentarily. ‘Yes. Yes he did.’ 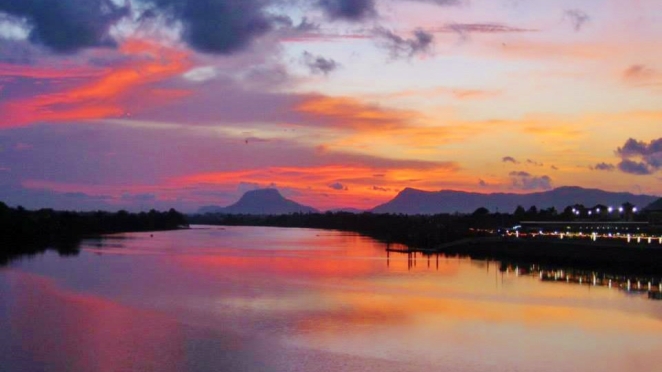 There’s always going to be the nasty murderer man, prowling round town waiting for an impressionable female tourist to walk down a dodgy unlit street to come see his bargain price genuine article Gucci watches. Or the guy on a moped that snatches someone’s handbag as they drive by. But for every monster in Southeast Asia, there are fifty-odd people that will go out of their way to look out for foreign visitors, even more so for girls. Because there is an underlying acceptance, particularly in Vietnam and Malaysia it would seem, that women aren’t quite as capable of looking after themselves as men, you actually get a lot of unsolicited help from strangers ( passionately feminist friends/fiercely independent types/Caitlin Moran lovers just reign in the rage for a moment, because honestly, it has its perks).

When I missed my only daily link to Gunung Gading National Park in Sarawak, I asked the bus company if there was any other way of getting there. They asked if I was going alone. I’m pretty sure at this point had I been a bloke, they would have left me to sort it out myself. As it was they called a taxi, haggled the price on my behalf, had two members of staff escort me to the pick-up spot (slow day at the office) and waited with me until said taxi pulled up. AND one of them told me a tale of how she didn’t know she was pregnant with baby number one until she was pushing little Aiyu out. Now baby two was taking shape but she’d been having an affair with a Pakistani chef so if it turned out to be his, it would be rather obvious to her Chinese-Malay husband (which isn’t very relevant here, but did pass the time).

Then there was Sapa in North Vietnam, where both I and one guy arrived simultaneously at a hotel, angling for their last available room. On the basis that it would be far worse to send a girl wandering around in search of shelter, I lucked out.

Or the time I and several others caught a travel bug in the same guesthouse. I happened to be the only girl. We would take it in turns to venture as far as the corner shop to load up on drugs and dried foods. When my turn rolled round the manager saw me sloping through reception, snatched the shopping list out of my hands and went on my behalf, lest I faint with female fatigue. Result.

Just three of countless instances where it has, rightly or not, paid to be a woman. Gender stereotyping might make you cringe a little across Southeast Asia, but when it comes to safety and the easy life, people have your back.